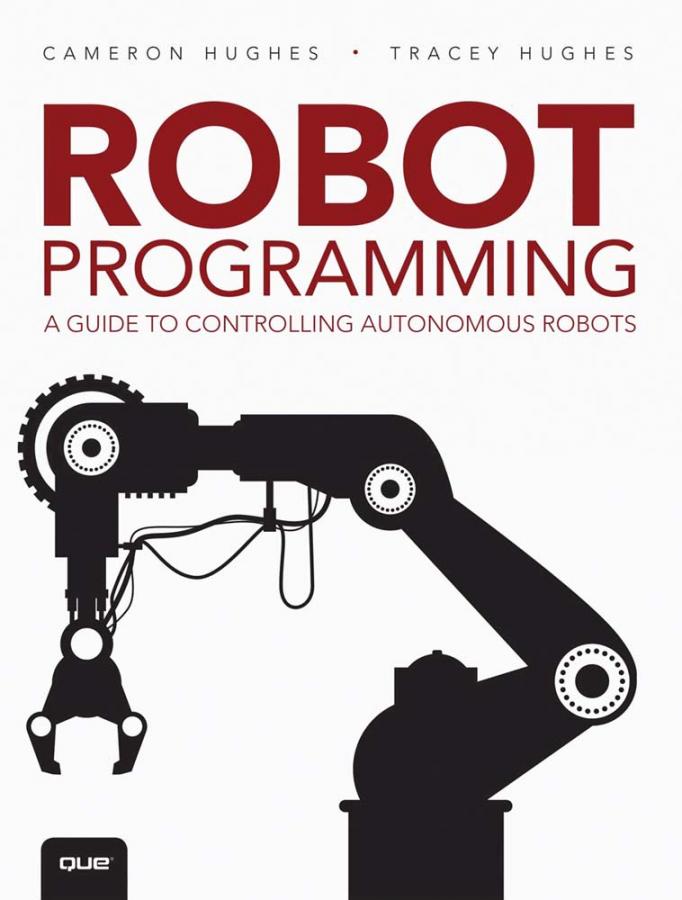 Be the first to review this product
Product ID: SKU17412
Price:
$25.00
The selected item is out of stock, please select a different item or combination
Add to wish list
Tweet

Robot Programming: A Guide to Controlling Autonomous Robots takes the reader on an adventure through the eyes of Midamba, a lad who has been stranded on a desert island and must find a way to program robots to help him escape. In this guide, you are presented with practical approaches and techniques to program robot sensors, motors, and translate your ideas into tasks a robot can execute autonomously. These techniques can be used on today’s leading robot microcontrollers (ARM9 and ARM7) and robot platforms (including the wildly popular low-cost Arduino platforms, LEGO® Mindstorms EV3, NXT, and Wowee RS Media Robot) for your hardware/Maker/DIY projects. Along the way the reader will learn how to:

Cameron Hughes is a computer and robot programmer. He holds a post as a Software Epistemologist at Ctest Laboratories where he is currently working on A.I.M. (Alternative Intelligence for Machines) and A.I.R. (Alternative Intelligence for Robots) technologies. Cameron is the lead AI Engineer for the Knowledge Group at Advanced Software Construction Inc., a builder of intelligent robot controllers and software-based knowledge components. He holds a staff appointment as a Programmer/Analyst at Youngstown State University. Tracey Hughes is a senior software and graphics programmer at Ctest Laboratories and Advanced Software Construction Inc. where she develops user interfaces and information and epistemic visualization software systems. Her work includes methods of graphically showing what robots and computers are thinking. She is on the design and implementation teams for the East-Sidaz robots at Ctest as well.

Both Cameron and Tracey Hughes are members of the advisory board for the NREF (National Robotics Education Foundation) and members of the Oak Hill Collaborative Robotics Maker Space. They are project leaders of the technical team for the NEOACM CSI/CLUE Robotics Challenge and regularly organize and direct robot programming workshops for the Arduino, Mindstorms EV3, LEGO NXT, and RS Media robot platforms. Cameron and Tracey are two of the authors of Build Your Own Teams of Robots with LEGO® Mindstorms® NXT and Bluetooth, published by McGraw-Hill/TAB Electronics, January 2013. They have written many books and blogs on Software Development and Artificial Intelligence. They’ve also written books on multicore, multithreaded programming, Linux rapid application development, objectoriented programming, and parallel programming in C++.

Login or Register to write a review.
Home Books Robotics