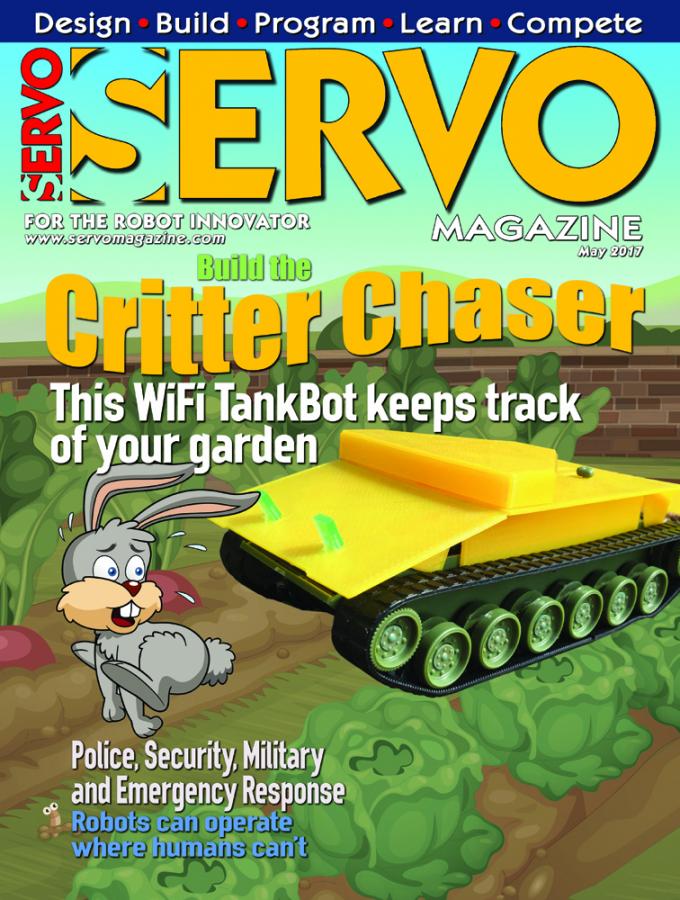 If your school or community organization is looking to put together an inspiring STEM event, here are some tips to help in the process.

Keep your garden varmint-free with this modified Wi-Fi controlled model replica of a historic tank robot.


Manipulating Cards with the Magician

Teach the Magician robot arm how to stack a deck of cards.


Animatronics for the Do-It-Yourselfer — Setting Up Shop

Having a special work area for your animatronics hobby is extremely important in your efforts to maximize your productivity.

Then and Now
by Tom Carroll
Police, Security, Military, and Emergency Response Robots
Robots can go (somewhat) more safely where humans can’t when helping out with different kinds of disasters.

Ask Mr. Roboto
by Eric Ostendorff
Your Robot Problems Solved Here (05.2017)
Read about troubleshooting random re-boots with a Raspberry Pi; if motion sensors can be used as infrared receivers for remote uses; reviving the battery in an AIBO; and getting into telepresence robots.

Tips for getting your team/robot picked for the popular TV show.

Description of the design and build of the new steel wedge for Isotelus Rex and how it fared at the Motorama 2017 event.

Taking on a challenge presented by Kyle Singer to build a 12 lb Hobbyweight robot.

Making a mini Beta (the 250 pound hammer robot built by Jon Reid, which appeared in season 2 of BattleBots) of my own.

Competing with Kilobots at their Canadian National Championship.

Smart Fabrics
by Bryan Bergeron
There has been great progress in creating smart fabrics worthy of super heroes, as well as ordinary folks.