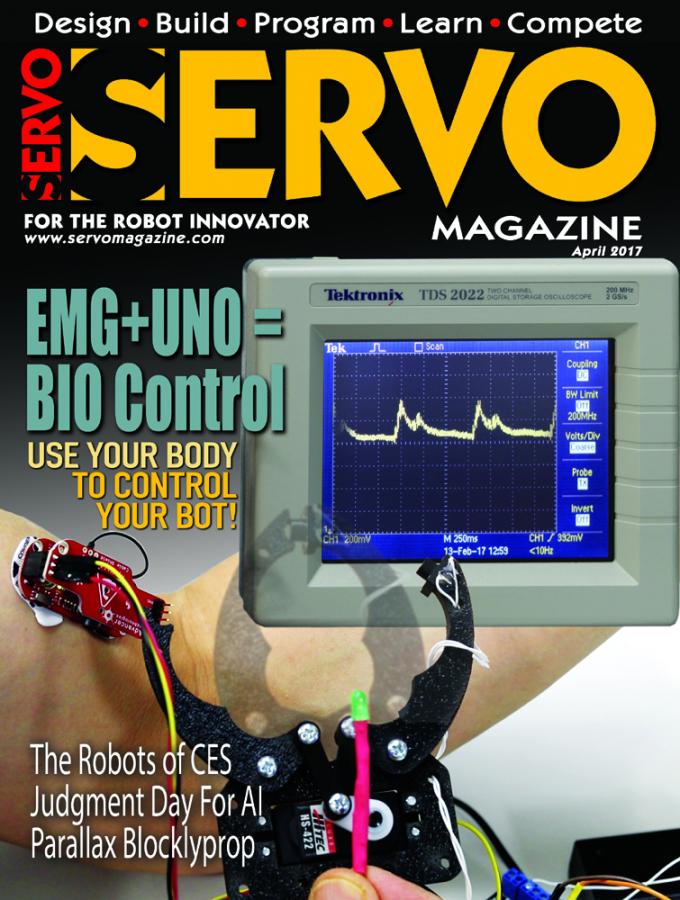 Take an in-depth look at using some alternative motors in animatronics/robotic builds.


Judgment Day for AI: Inside the Loebner Prize

A judge’s perspective on the Loebner Prize.

An engineering mentoring program at the University of South Florida is bringing STEM and real world learning to area youths.

Parallax has added Blockly to its list of tools for programming their popular Propeller microcontroller.


EMG Control and Monitoring of a Servo Gripper — Closing the Loop

Use your body to control your bot.

Ask Mr. Roboto
by Eric Ostendorff
Your Robot Problems Solved Here (04.2017)
There’s a new sensor on the block: a laser obstacle type that you just have to try.

Then and Now
by Tom Carroll
What’s New in Robotics
Discover the robots of CES 2017.

Robytes
by Jeff Eckert, Jenn Eckert
Stimulating Robot Tidbits (04.2017)
Stimulating tidbits on the latest happenings in robotics for consumers, universities, professionals, and everything else in between.

The Glass Cannon: The Tale of a Newbie’s First Venture into Combat

Most bot builders remember their first foray into the sport of robot combat; many with varying degrees of success, but all with some degree of nostalgia and just a little bit of embarrassment.

After putting my 12 lb (Hobbyweight) combat bot, Isotelus Rex on a weight loss program to get better results at competitions, it was time to build the new lighter chassis and drivetrain.

Finger Spinners — The Killer App for 3D Printers?
by Bryan Bergeron
With a 3D printer, you can make a finger spinner yourself a lot faster than ordering one online.