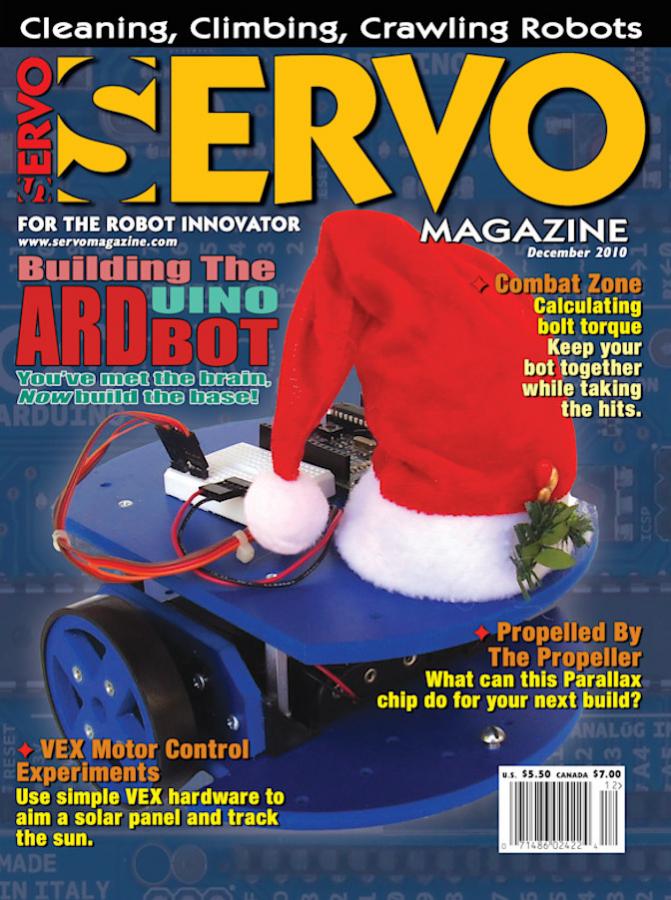 Rate the eM8 — Part 2
by Fred Eady
You can’t build robot smarts if you can’t speak the language. Or, in this case, speak the languages. We’re about to continue our port of the eM8 assembler application to CCS C. Page 38

Propelled by the Propeller Chip
by John Blankenship, Samuel Mishal
This article is an excellent demonstration for how the parallel processing abilities of the Propeller chip from Parallax can be utilized in conjunction with RobotBASIC to achieve robotics projects that involve diverse and multifaceted elements that require simultaneous use of numerous microcontrollers along with a PC. Page 70

by Greg Intermaggio
Things get light-hearted as we learn about dynamic variables by making Eddie seek light. Page 46

Making Robots With the Arduino — Part 2

by Gordon McComb
Now that you’ve been introduced to ArdBot and its central Arduino brain, it’s time to construct the base. Page 52

GeerHead
by David Geer
Robots Clean Oil Spills, Climb and Crawl Anywhere
Seaswarm robots and snake robots have been created to service many types of terrains and environments. Between them, they greatly improve the quality of work that robots can perform, cleaning and maintaining a variety of environments. Page 10

PARTS IS PARTS: Fingertech Tiny ESC v2 Review
in Combat Zone: Features
Just a few weeks back, Fingertech Robotics released the upgraded version of their popular TinyESC single channel speed controller. I was one of the first to have a chance to try out this new piece of hardware in the arena, and my experience so far has been nothing but positive. Page 28

MANUFACTURING: Calculating Bolt Torques
in Combat Zone: Features
Sparks fly as the two robots smash into each other again. Sweat drips down your forehead as you prepare for another charge across the arena. Page 29

Potpourri
in Combat Zone: Features
That’s right, botheads, I used the word “potpourri” in an article title! Just like a fighting machine, I have a soft vulnerable inside also. Get over it, okay? Page 32

Robots: From Industrial to Some Amazing Capabilities
by Tom Carroll in {article_column}{article_column:title}{/article_column}
Besides some independently-built creative robots in university labs that exhibited ‘animalistic’ properties, most early robot products were of the industrial variety. Page 76