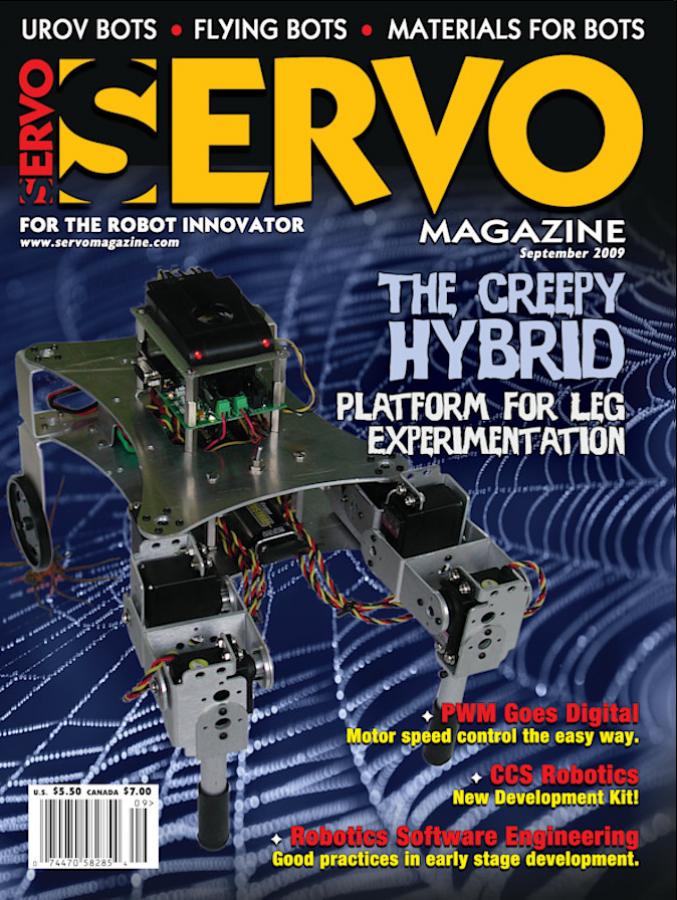 Robotics Software Engineering
by Fulvio Mastrogiovanni
Get an introduction to the benefits of software engineering for robots, particularly the best practices in the development stages and specifically in complex robotic systems. Page 46

by Bill Axsen
With this circuit, you can control the speed of a motor with a computer, connect a sensor array to track a light source, or just control speed without a variable transformer. Page 34

Twin Tweaks
by Evan Woolley, Bryce Woolley
Are You Ready To iARoC?
This year, we were once again brought back to the Del Mar Fairgrounds by the incomparable allure of a robotics competition, though this time we were only spectators. Yes, 2009 witnessed the second annual iARoC event — the International Autonomous Robotics Competition. Page 58

Robotics Resources
by Gordon McComb
Simple Brains - Going Back To The Basics
Microcontrollers like the BASIC STAMP, BasicX, Arduino, AVR, PIC, and all the others make short work of just about any robotics task. Page 72

Your Robot Assignment Is Due
in Combat Zone: Features
You never really think of robot building and school work as similar, but you may be surprised. Consider this: Homework is given and the due date is established; a competition task is given and the competition date is listed. You the builder are like the student; wanting to do well but a victim to the evils of circumstance. Page 24

Bay Area Robot Flights
in Combat Zone: Events
MetroCon is an Anime Convention that is held annually in Tampa, FL. This was the seventh annual year that MetroCon has been held, and it is the largest Anime Festival in the state of Florida. Page 30

Wheels For Drills
in Combat Zone: Features
Iwrote an article for the November ‘06 issue of SERVO that outlined how to convert the motors and gearboxes from cheap cordless drills for use as the drivetrain in smaller combat robots. Page 31