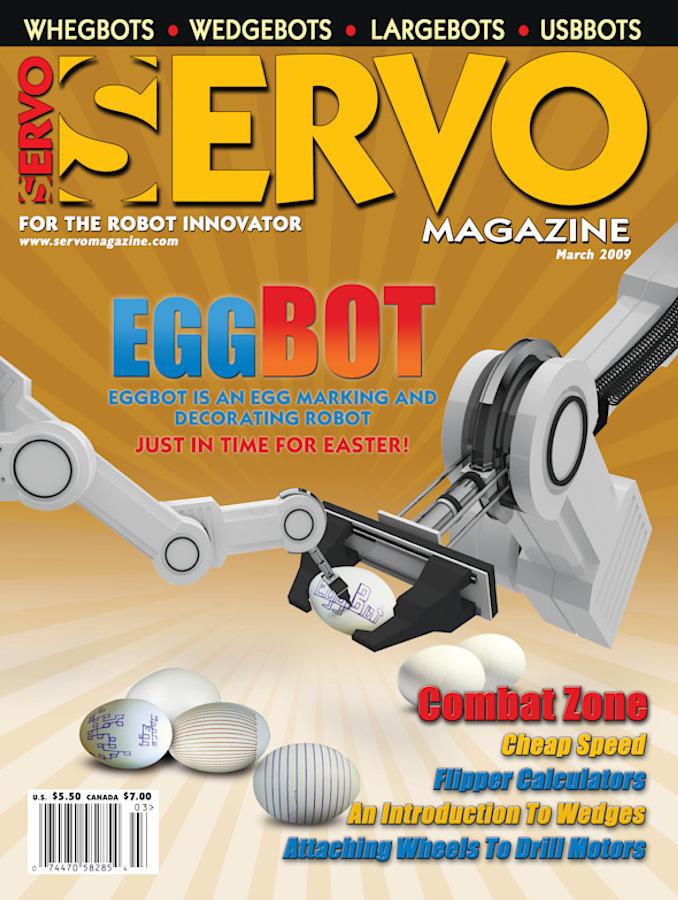 by Fred Eady
Robotics and electronics go hand in hand. If you're also a Nuts & Volts reader, you know that we assembled a working Silicon Laboratories-based USB microcontroller interface in the Nuts & Volts Design Cycle column. This month, we're going to pull that Nuts & Volts USB project into RoboLand and put its resources to work in a mechatronic kind of way... Page 36

by John Iovine
Egg-Bot is an egg marking and decorating robot, just in time for Easter. It uses two standard Hitec HS-322 servos. The brain for Egg-Bot is the SMC-04 USB servo controller. However, if you have a programmable servo controller that can control two Hitec hobby servos simultaneously, you can use it instead. Graphic designs and/or text is programmed into Egg-Bot using the GUI interface of the SMC-04 USB controller... Page 50

Build The Ultimate Robot: Part 6 | An Arm for Megabot

by Michael Simpson
This month, we will add an external webcam to a fully articulated robot arm. We then will add buttons on our desktop controller program to allow us to control this arm. Page 57

by Ron Hackett
Kit Available in the SERVO Online Store! In last December's issue of SERVO Magazine, we implemented a simple project that enabled us to control the TankBot's movements with any universal TV remote control capable of transmitting the Sony Infrared Control (SIRC) protocol. This month, we're going to take the opposite tack and enable the TankBot to explore the environment on his own, without any intervention on our part. In order for the TankBot to avoid ramming into any obstacles, we're going... Page 67

Robytes
by Jeff Eckert
Automated Blade Inspection
Back when oil was selling for $4 per gallon and US banks still appeared to have money, T. Boone Pickens' announced a $10 billion wind farm project that would have added 2,700 wind turbines to the grid and 4,000 MW of generation capacity. The old skinflint has since changed his mind, but as of the end of 2007, the USA already had nearly 17,000 MW of installed wind capacity, ranking it no. 2 in the world. Nr. eine was Germany, with better than 22,000 MW, so it is perhaps not surprising that the... Page 08

GeerHead
by David Geer
What is a DAGSI Wheg?  An adaptive wheel-leg robot!
Doctors Roger Quinn (engineering), Roy Ritzmann (biology), and colleagues at the Case Western Reserve University (Case) collaborate in the neuro-mechanical research of cockroaches. In 2001, their studies lead to the birth of the Whegs (wheeled legs) robots, a product of the Case Center for Biologically Inspired Robotics. Research (or, the Biorobotics Lab)... Page 10

Ask Mr. Roboto
by Dennis Clark
Ask Mr. Roboto | March 2009
Q. I'm interested in the Dinsmore electronic compass circuit and I want to build one for myself. Can you provide more information about how I can get the parts for it? Page 14

Twin Tweaks
by Bryce Woolley, Evan Woolley
Living Off The Land
This month, we have the pleasure of presenting the Surveyor Drive Base kit from Inertia Labs. Readers may recall our adventure with an already assembled Surveyor robot from a few months ago, which sported a unique method of teleoperation over a wireless network. The drive base, on the other hand, is a tabula rasa as clean and pristine as Descartes could have imagined. A kit with such potential is both exciting and intimidating, with the only limit to the possibilities being your imagination... Page 18

Robotics Resources
by Gordon McComb
Setting Up Your Own Robotics Workbench
With the right tools, you can make just about anything. That certainly goes for the fine art of robot building. With proper tools, your robots are more dependable and accurate, and they'll probably look better, too. Page 73

Then and Now
by Tom Carroll
Large Robots
Large robots, on the other hand, are usually easier to construct as basic tools can normally be used to cut metal, fasten fasteners, and position the parts. However, due to the larger size, large machines of any type need large motors and more beefy power supplies. These larger items cost more money and that may limit going larger. Some of my best robots were in the hundred to two hundred pound class, human-sized anthropomorphic machines. I've always enjoyed building large bots that can move... Page 78

An Introduction to Wedges
in Combat Zone: Features
Since the inception of robotic combat, the wedge has been viewed as one of the most successful and easy to build designs, though it has also become among the most hated. Page 26

Attaching Wheels to Your Robot’s Drill Motors
in Combat Zone: Features
Here, I will show you a simple way to make press fit hubs to mount Colson wheels to your drills. Page 28

Robotic Competition, Southern Style
in Combat Zone: Features
There have been many articles and books written over the years trying to untangle the murky pre-history of robotic combat in the United States. Page 30

Cheap Speed
in Combat Zone: Features
You can control your robot with a simple relay H-bridge that gives you just three settings: off, full forward, and full reverse. These controls — sometimes called “bang bang” for the way they drive your machine — are cheap and easy to make. Page 33

Unintended Consequences
by Bryan Bergeron in {article_column}{article_column:title}{/article_column}
In the world of robotics, advances in one application area often have unintentional, beneficial consequences in other areas, regardless of whether the initial application is a commercial success. Case in point — the Japanese robotic strawberry picker, touted as one of the prominent engineering failures of 2008 (http://www.spectrum.ieee.org/jan09/7130). The autonomous robot is considered an economic failure by some because it's too expensive, too slow, and is restricted to a specially configured... Page 06