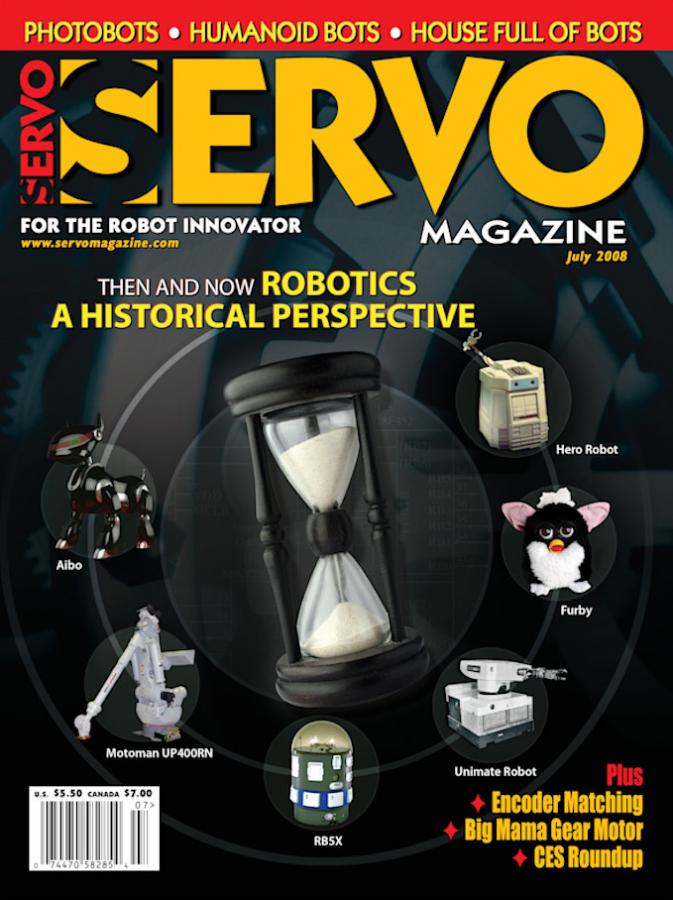 CES 2008 Robot Roundup
by Ted Larson
As usual, in the second week of January, over 100,000 technology lovers converged on Las Vegas for the 41st annual Consumer Electronics Show (CES). The show went on from 8 AM to 5 PM for four days, and even then, it was almost impossible to see everything. CES took up 1.8 million square feet of trade show space, spanning all of the major convention centers in Las Vegas. So much walking is involved for the attendees, you can easily blow out your feet unless you are wearing running shoes... Page 34

by Robert Doerr
One of the joys of the robotics hobby is mastering the art of interfacing. A lot of the parts are already in front of us and we just need to make them work together. Recently, I ran into a problem with a pair of quadrature encoders for the drive train on one of my robots. The encoders themselves worked fine and were generating perfect quadrature outputs. However, they were sending out data faster than the controller could handle at higher speeds. As a result, the encoder readings were ... Page 39

by Alan Marconett
In this second part of the Loki project, the QwikFlash controller board and its control softwaRE will be examined. This is a very useful board for all kinds of robotic projects. I have two running bots at this time and another one in the works! Page 50

Robytes
by Jeff Eckert
The Vulture Seldom Comes Home to Roost
On a more celestial level, DARPA is also funding a competition to develop an unmanned aerial vehicle that will shatter endurance records. The bird will draw 5 kW of power, carry a 1,000 lb (450 kg) payload, stay aloft for at least five years, and remain in its assigned airspace 99 percent of the time while fighting winds encountered at operating altitudes, reportedly ranging from 60,000 to 90,000 ft (18,000 to 27,000 m). The goal is to provide long-term intelligence, surveillance... Page 08

GeerHead
by David Geer
Lewis, the Robot Photographer
At first brush, a robot that snaps people’s pictures might not imbue the mind with a novel image. But, a photographer that sets its subjects at ease, circumvents their shy and self-conscious natures and related facial reactions, and captures the essence of the subject unawares, now that’s a wonder to see! When Lewis the Robot Photographer first enters a crowded room, it gets attention. But, once people have adjusted to its roaming around, looking here and there, they forget all about it... Page 12

Twin Tweaks
by Bryce Woolley, Evan Woolley
There’s a New Humanoid on the Block
Humanoid shaped servo robots are some of the coolest robot kits around. They are generally simple to build, and the finished product is agile and undeniably entertaining. Robots this cool, however, often come with a hefty price tag. We’ve been lucky enough to review two such kits for SERVO so far. The surprising nimble Robonova-1 from Hitec will run you over $1,000, and the versatile Bioloid kit from Robotis comes with a price tag of about $900. These prices likely put these bots out of the... Page 58

Robotics Resources
by Gordon McComb
Stocking Up With Surplus Electronics
Just because one person doesn’t want it doesn’t mean it isn’t valuable. That’s the case with surplus. Simply put, surplus is excess stock for resale. Sometimes it’s used, sometimes it’s new. Occasionally, it’s worthless junk, but very often, surplus has a beneficial use to someone, somewhere. And just as importantly, surplus means the item isn’t being thrown away in the trash, so it’s not clogging up a land fill... Page 64

Different Bits
by Heather Dewey-Hagborg
Random Bits
Throughout this column, we have relied on the idea of randomness to seed all of our unconventional computing experiments. In this month’s article, we will take a brief detour from code and hardware to examine just what the concept of “random” actually means, how our microcontroller is implementing it, how this differs from a computer, and some schemes for creating “true” random number generators... Page 67

Appetizer
by Kym Graner
Dusting Robots One Woman’s View of Life With an Electronics Hobbyist
Rather than reflecting my daydreaming interest in a Better Homes & Gardens living space, our house now sports a look that was once described by a friend as looking like Godzilla swallowed a RadioShack and then threw up. There’s a part of me that wishes my home could revert to the “normal” decorator dream it started to become. Page 74

Then and Now
by Tom Carroll
Robotics - A Historical Perspective
Over the years, I have written about advances in all types of robot designs, robot technology, and various robotic subsystems in this column. In each article, I have tried to cover advances in the science of robotics and have covered the history of a part of robotics in a specific way. I have never tried to examine the way that we humans have viewed these creations of ours as they have slowly taken over many parts of our lives. I have often wondered just what mindset developed in people’s... Page 77