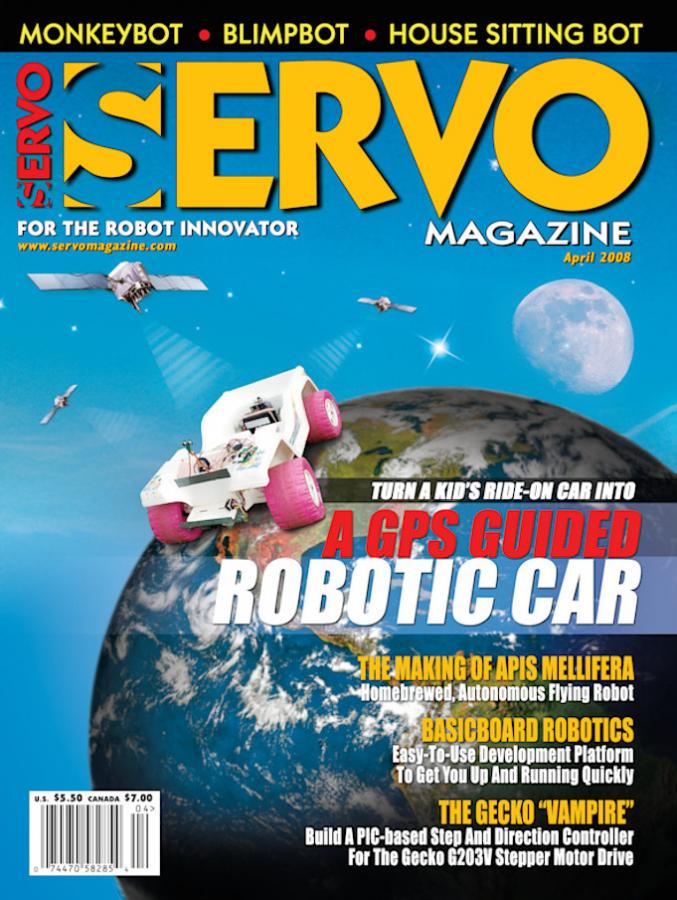 Gecko “Vampire”
by Fred Eady
“In Transylvania, cloves of garlic, sharp wooden stakes, hawthorn branches, and a cross are just a few of the necessary tools one needs to combat vampires ...” Running water, daylight and holy silver bullets are also potent vampire killers. If your vampire pest was once a mortal human being (most all of them were), every vampire killing tool I’ve just called out will do the job. However, if your vampire smells of silicon and steel, forget about getting any killer results from the garlic and ... Page 42

The Appliance of Science | The First Annual Franklin Institue Event
by Pete Smith
The Northeast Robotics Club (http://www.nerc.us) has held a very successful event every February in Harrisburg, PA and this year, they partnered with the Franklin Institute Science Museum (www2.fi.edu) to add a second major event. The Institute is a modern, hands-on type of museum situated in the center of Philadelphia. It houses many large exhibits in a bright modern building which also includes an IMAX cinema. It is, in many ways, an ideal venue for a robotic combat event with a regular audience ... Page 64

Reviving an Androbot BOB | Part 3
by Robert Doerr
Over the last couple months,I’ve been using a lot of leftover parts to revive an early Androbot BOB prototype.He was missing all of his brains and had been sitting for years as an empty shell.Although I would have preferred to find the original electronics, I decided that I should at least use some extra parts from past projects to get BOB rolling again. All of the new electronics just plug in and bolt on so that no alterations are done to the original shell. The February ‘08 issue covered... Page 67

BasicBoard Robotics | April 2008
by William Smith
Several years ago, I started a new hobby of programming embedded controllers using a development board known as the BasicBoard. I found it easy to use since you could program it in the Basic language and have all the features you could want already built in like LEDs, switches, speakers, LCDs, and expansion ports to connect servos and sensors. The robot shown here is a simple robot I built around the BasicBoard. Getting started with the BasicBoard is really simple... Page 74

Designing and Building a Robot from Scratch | Part 2

by Brian Benson
...we can now begin the actual design! In this installment, I will be discussing how to determine what you need for parts, how to choose them, developing your design, and more! There is one thing that is true about design ... it is an iterative process! While I have outlined the following steps in the order that is the best way to approach a design, you will find that you will spend much of the time going back and forth making adjustments, changing your mind, and fixing problems... Page 36

by Bob Allen, Tony Pratkanis
Bees do it. Birds do it. Why shouldn’t robots do it, too — fly through the air, that is? Although there have been some military and commercial robots that fly, there have been very few home brewed autonomous flying robots. One reason that flying robots have not filled the airspace in backyards and robotics clubs is because flight imposes engineering obstacles that must be overcome. These obstacles are similar to those that confronted the early versions of bees and birds. In order to fly,bees... Page 50

by John Overstorm
I have been reading SERVO Magazine and Nuts & Volts for a few years, but throughout this time I have not been doing any robotics myself, so I decided that I needed to start experiencing things first-hand. This article describes my first venture into the world of robotics. I have been an electronics hobbyist since I was young and an engineer for many years. Throughout these years, I have been scavenging parts from cast-off hardware and from the trash at work, so I have a reasonable supply of ... Page 56

Robytes
by Jeff Eckert
Robytes | April 2008 | Monkey to Bot Interface Successful
Back in January, history was made when researchers at Duke University (http://www.duke.edu) via the “Network Brain Machine Interface,” connected a monkey brain’s motor and sensory cortex to a humanoid robot located at the Japan Science and Technology agency. As certain neurons fired at different phases and varying frequencies, the signals were interpreted and converted to control the robot’s legs. Thus, as the monkey walked on a treadmill, the bot imitated its movements. The monkey was provided ... Page 08

GeerHead
by David Geer
Rovio, Robotic House Sitter
Out of the west rides a three-wheeled guardian named Rovio. When the family is not at home, Rovio roams, the internal landscape (carpets, hardwood floors, tile), keeping a CMOS sensor eye open at all times, monitoring property, pets, and the home environment. Rovio uses a single VGA CMOS sensor to facilitate image capture and digitization so that images can be processed, stored, and transmitted over a network to the end-user via access points or the Internet. Rovio’s built-in computer “eye”... Page 10

Lessons From The Lab
by James Isom
NXT Packbot | Part 4
Welcome to the final installment of Packbot instructions. There’s not much left now, so let’s get right to it and wrap it up. Page 78

Robotics Resources
by Gordon McComb
Power Tools for Robot Construction
Comedian Tim Allen’s most enduring character is Tim Taylor, of the ‘90s television show Home Improvement. Tim was the over-zealous host of a how-to program on using — and abusing! — tools and hardware. In just about every eposide, Tim attempted to “improve” some tool by adding extra horsepower. And, of course, it always backfired. Tim was a man who obviously loved tools and what they could do. For many, part of the fun of building robots is playing with the tools used to construct them in ... Page 82

Appetizer
by Dan Kara
Robotics Events Reflect Hot Market Segments
As a conference developer serving the personal, service, and mobile robotics industry, I am constantly challenged with finding the ‘sweet spot’ in the market where sweetness is defined both by creating and running a profitable event, as well as serving the needs of the attendees and sponsors. Growing the overall robotics industry is also a bonus. From a strictly business standpoint, conference developers try to avoid overlapping coverage with existing events, particularly their own events ... Page 90