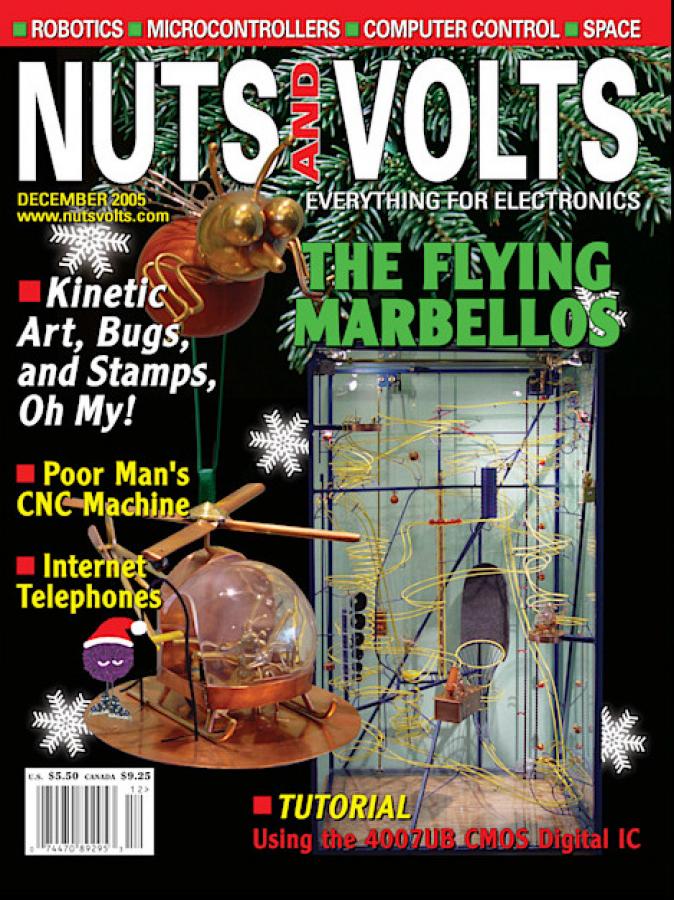 Freeware Linux Hardware Firewall HOW-TO: Have A “Smoothie”
by David Geer
We’re about to cover parts and instructions for creating your own Linux hardware firewall using an old box (computer) and the SmoothWall Express 2.0 firewalling software package. Page 58

Data Processing Using SCAM - Part 3
by Gamal Ali Labib
In this article, I adapt some logic and mathematical algorithms for associative processing using my SCAM. I describe how those algorithms are executed in the SCAM in terms of hardware operations. I also show how to calculate the execution time of each algorithm to evaluate the SCAM performance. Page 66

Using The 4007UB CMOS Digital IC
by Ray Marston
Ray Marston takes a detailed look at the 4007UB CMOS IC and explains how it can be used in a wide range of useful digital and analog applications. If you are unfamiliar with modern CMOS, the very best way to learn about it is by experimenting with the inexpensive 4007UB IC. Page 76

by Victor Chaney
Click!... Whirrr... Hummm... Bang! These are the sounds of "The Flying Marbellos" - a rolling ball sculpture with marbles and small metal "bugs" to run the Stamp controlled show. Page 36

by Michael Simpson
In this article, I will show you how to build an electronic launch control with the Athena microcontroller. Page 46

by Dan Gravatt
Wouldn’t you love to have a fancy computer-controlled drilling and milling machine so you could make whatever part you needed? Wouldn’t you love even more to have the money one of those machines cost? Well, I don’t have either, but I do have an occasional need to fabricate a simple part or drill a custom circuit board. Page 52

Q&A
by TJ Byers
Q&A
In this column, I answer questions about all aspects of electronics, including computer hardware, software, circuits, electronic theory, troubleshooting, and anything else of interest to the hobbyist. Page 12

Personal Robotics
by Dave Prochnow
Me And Mini Me
Gosh, it’s tough being a mad scientist these days. There are no good secret agents left to torment (Bond, who?), you can buy lasers at virtually any strip mall, and everybody’s far too busy for world domination. So what’s an evildoer to do? Page 18

Stamp Applications
by Jon Williams
The Sounds Of The Season
A few months ago, one of my Texas prop building friends — an exuberant guy named Vern Graner — told me about a cool MP3 player module from Rogue Robotics called the uMP3 (micro MP3) that was BASIC Stamp compatible. It turns out that Vern is right: the uMP3 player is cool, it is BASIC Stamp compatible, and thanks to recent efforts at Rogue Robotics, it’s even easier to use with BASIC Stamps — including the Prop-1 controller. Page 24

In The Trenches
by Gerard Fonte
Human Nature - Part 2
This month, we'll take a somewhat more serious look at human behavior than last month and examine what motivates people and how to understand why people act as they do. We'll see that once you learn the underlying principles of behavior, some seemingly absurd actions can actually be normal and expected. Page 88

Open Communication
by Louis E. Frenzel
Internet Telephones
By now, you have all probably heard of Internet telephones, or IP phones as they are sometimes called. They are also known as voice over Internet protocol or VoIP phones. In fact, you may already have one if you are one of those early adopters of high tech stuff. If you don’t have one, you can almost be sure that a VoIP phone is in your future. Let’s take a look at how these phones work. Page 94