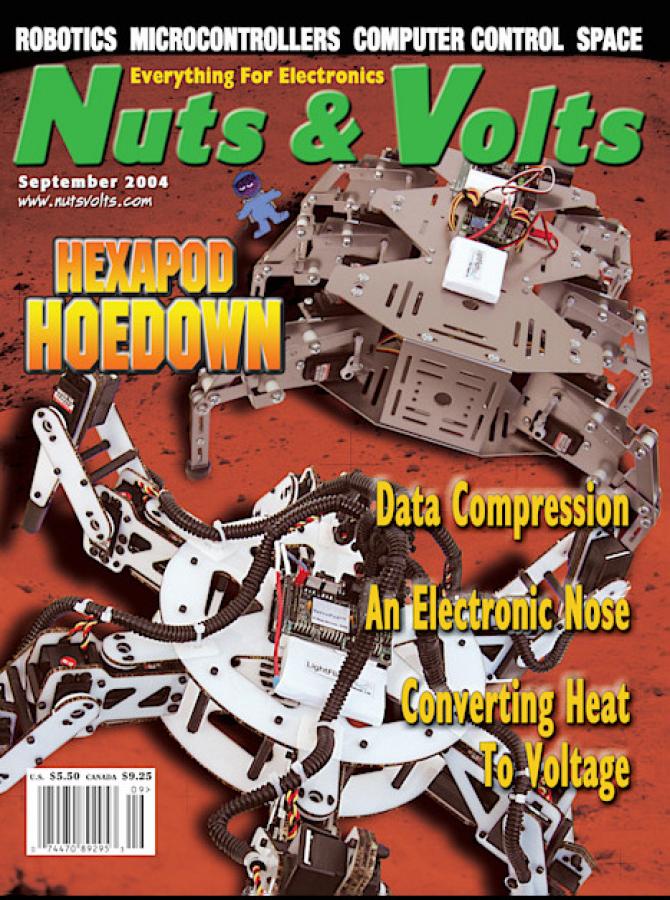 BOOK REVIEW: HAM RADIOS FOR DUMMIES
by Karl Lunt
Starting out in ham radio can be fun, but — as with any high tech hobby — there are plenty of hurdles to overcome. Ward Silver’s new book, Ham Radio for Dummies, published by Wiley, offers a well-written and friendly guide to starting and growing your new hobby...

BOOK REVIEW: THE DIGITAL CONSUMERS TECHNOLOGY HANDBOOK
by Edward B. Driscoll, Jr.
On April 3, 2000, when President Clinton’s Justice Department issued its ruling that Microsoft had violated US antitrust laws and the NASDAQ plummeted 349 points (or 7.64%) — its worst single-day performance ever — it signaled the end of the Internet bubble. The next year, the horrific terrorist attacks on the US occurred on September 11th. As a result, we’ve seen much less of what Tom Wolfe once dubbed the “digibabble and fairy dust” that ruled the 1990s...

MICRO MEMORIES
by Edward B. Driscoll, Jr.
In the 1960s, it required enormous sums of capital just to research robots. There were essentially two groups doing research into robotics: one corporate and the other using government money. Dr. Joseph Engelberger was developing the first robots for automobile assembly lines — technology eagerly purchased by General Motors and, later, by other automobile manufacturers.

by Mike Keryan
With an inexpensive surplus OEM GPS board, BS2 sx, and some other parts, you can build a GPS unit customized to your needs. This first part of two describes the hardware. The second part will describe the software.

by Ralph Lorenz
Be the envy of your colleagues with this über-nerd coffee mug that generates power from heat using the same energy converters that are used on deep space probes! Equipping a mug with thermoelectric energy converters and heatsinks will allow you to drive a small motor or other electrical device. You can even claim to be environmentally responsible by extracting useful work out of heat that would otherwise just go to waste.

by Ronald Newton
My wife and I were taking our morning constitutional walk up the hill when I noticed the smell. The wind was from the south. “Do you smell that?” “What?” she said, “I don’t smell anything.” “Our neighbor must be gluing some PVC pipe or fiberglassing something.” I didn’t think much more about it, but the smell continued off and on for the next couple of weeks...

by Gerard Fonte
This is the last part of the Enigma series. In some ways, it should really be the first because The Enigma Machine grew out of these high power observations. It was only after the electrical, physical, and chemical experiments were performed that enough information became available to design it.

In The Trenches
by Gerard Fonte
IN THE TRENCHES
There is probably no other profession that depends upon specifications as much as engineering does. You create something to meet some set of requirements or you rely on the performance data of various components. Very often, both aspects are employed at the same time. Knowing how to make, read, and understand specifications is an important part of engineering.

Let’s Get Technical
by James Antonakos
LET’S GET TECHNICAL
Data compression has been around for a long time. If you’ve heard the expression, “A picture is worth a thousand words,” then you are familiar with the basic principle of data compression: replacing one set of symbols with another, smaller set. A high resolution photograph of an object is a better description than a mere thousand words can evoke.

Near Space
by L. Paul Verhage
NEAR SPACE
The study of electrostatics was our first step in the field of electronics. In electrostatics, electric charges are relatively stationary. So, the natural philosophers (early scientists) who studied the phenomenon of electrostatics concentrated primarily on the creation, storage, and interaction between the two types of electric charges. One of their tools was the electroscope, a device consisting of two metal foil leaves draped over a metal rod and protected within a glass jar.

Personal Robotics
by Mike Keesling
PERSONAL ROBOTICS
Some of us build robots for the educational aspects, others for a creative outlet. Some of us undoubtedly have a god complex or parenthood issues, but there is one thing that you can’t deny and that is that robots are great for impressing your friends.

Q&A
by TJ Byers
Q&A
In this column, I answer questions about all aspects of electronics, including computer hardware, software, circuits, electronic theory, troubleshooting, and anything else of interest to the hobbyist.

Stamp Applications
by Jon Williams
STAMP APPLICATIONS
On a recent return trip from Starbucks, I noticed myself doing something that actually made me laugh. While steering with my left had, I would reach down with my right hand to adjust the coffee spout such that coffee would not slosh out while I was cornering. Honestly, I laughed out loud, then immediately thought that, if I had an accelerometer, a stepper motor, and a BASIC Stamp, I could keep both hands on the wheel. An idea was born ...